As always, first the chronology:

7/19/20 – Sunday – Up late and usual morning routine. Cleaned up and did chores around the house. Had lunch. Downstairs and did the blog. Over to Gary’s for the afternoon get together. Home and more chores. Kathy was shopping and came home. Helped her unload and put things away. Had dinner. Took out the garbage. Downstairs and set up my Raspberry Pi things and loaded a new SD card for it. Got VNC working. Upstairs to bed, computer updates, Big Bang and sleep.

7/20/20 – Monday – Up at the usual time and usual morning routine. Kathy was already up and gone to babysit the grandchildren. I went downstairs and started work on the Raspberry Pi computer for my HAM desk. Stopped for lunch and took the Chrysler over to the Morton building and checked the fluid levels. Took a look at the APRS system but didn’t find anything glaringly wrong. Look at the chipper/mulcher and decided it needs a tune up. Inside and cleaned up. Downstairs and ordered parts for chipper/mulcher. I cleaned up the kitchen and started getting dinner ready. Kathy came home and we ate. I chatted with the guys on 2 meters. Then out to Country Mart for a few things. Home and continued work on the Pi. Computer updates. Bed, TV and sleep.

7/21/20 – Tuesday – Up at 5AM for some reason. Laid in bed playing my phone till 6:30 when Kathy got up. She was off to watch the grand children. I had breakfast and went back to bed till 10. Spent the rest of the day playing with my Raspberry Pi computer. Kathy came home and we had dinner. Chatted with the guys on 2 meters. Practiced CW and did computer updates. Upstairs, chores, bed, Big Bang and sleep.

7/22/20 – Wednesday – Up at the usual time and usual morning routine. Cleaned up and Kathy and I were out to Best Buy. Found little of what I was looking for. Headed home and stopped in Taylorsville for carpet tape and then lunch at the Mexican Restaurant. Home and Kathy went outside for chores and I went to my room for more Raspbery Pi work. She came in and we put the carpet tape on the floor for her carpet in the office. Kathy took a nap and I returned to the Raspberry Pi. Kathy woke up and we had dinner. Downstairs to chat with the guys on 2 meters but neither showed up. Did computer updates, practiced some CW. Upstairs to bed, Big Bang and sleep.

7/23/20 – Thursday – Up a little early this morning and usual morning routine. Kathy was up and out to have blood drawn for her annual doctor’s visit. I went for a hair cut. Came home and did some work on the Raspberry Pi till Kathy got home. Chatted awhile then had lunch. Went to bed and took a nap. Not very motivated today. Parts came for the chipper/mulcher. Up and more work on the Raspberry Pi. Dinner. Chatted with the guys on 2 meters. Computer updates, practice CW. Upstairs and chores with Kathy. Bed, Big Bang and sleep.

7/24/20 – Friday – Up at the usual time and usual morning routine. Out around 10 AM to start the yard work. About 20% done and the John Deere stopped working. Everything was fine except when you put your foot on the pedal to go forward or backward it wouldn’t go. Called the dealer and he thought it might be a belt and he explained how it worked. I took a look and everything was up inside the frame. I decided to take it over and let them repair it. Went by Mike and Julie’s place and picked up his zero turn mower. Home and off loaded it. I couldn’t steer the thing to save my life. Kathy came out and continued mowing with it. I did some trimming and burned out about 5:30. Came inside, cooled down and took a shower. Kathy came in. I chatted with the guys on 2 meters while she got cleaned up. Then ordered Chinese and she went to pick it up. Ate then downstairs for computer updates. Upstairs to bed, TV and sleep.

7/25/20 – Saturday – Up a little late and the usual morning routine. Out around 11AM to continue yard work. Finished up about 1:30PM. Came in and ate a light lunch while cooling off. A nap then a shower. Did some more Raspberry Pi work till dinner time. Had left over Chinese for dinner. Downstairs to chat with the guys on 2 meters. Computer updates. Upstairs for dessert. Bed, Big Bang and sleep.

Last week I tried working on the burn pile with the chipper/mulcher.  It quit after a short period of time.  Got a chance this week to look at it and it appeared it wasn’t getting gas.  So, I ordered another carburetor in a tune up kit that comes with a new spark plug and air filter.  It arrived this week and I have that project on my agenda for this coming week. 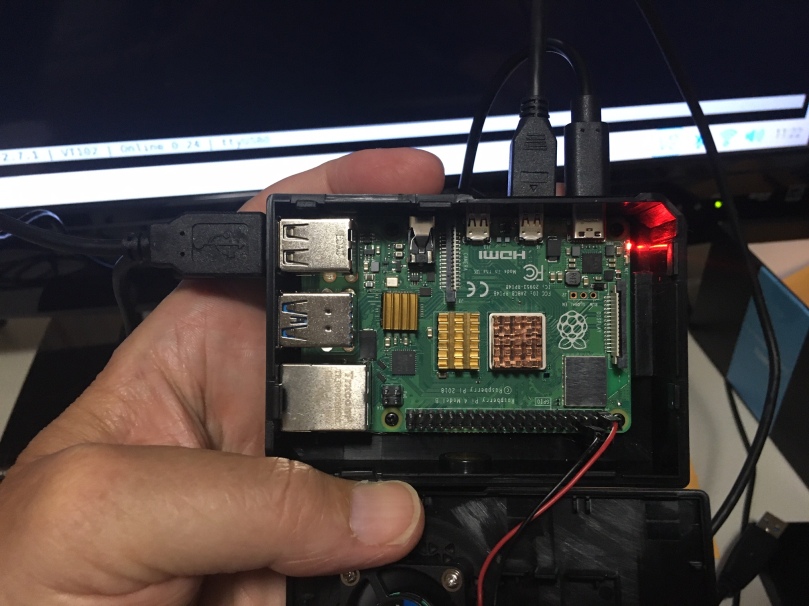 In case you forgot, this is a Raspberry Pi.  It is a full blown computer that’s in a box slightly larger than a pack of cigarettes.  It has no hard drive and uses a micro SD card for storage.  It runs it’s own version of Linux called Raspian.  All those pins along the bottom edge are general purpose input and/or output pins (GPIO).  I used one of these to do the control work on the garage doors so you can see if they are open or closed from your cell phone and open or close them as you wish with the same interface.  Now I’m configuring one to do all the work that the desktop computer at my HAM desk is doing.  Oh yea, and the price for one of these work horses is about $35 to $65 depending on home much memory you want on it.  That’s just the price of the computer so you need to add a couple bucks for the case if you want one.  And the recommended 32Gb MicroSD card is about $12 on sale at Best Buy.  So, you see it’s extremely cheap and very powerful.  I will keep you advised how this effort goes.

I have been working on the CW periodically but not as much as I should.  It seems the only time I remember to do it is in the evening.  And by then I’m too tired to really work on it.  I will continue to try.

Kathy and I stopped for lunch at our favorite Mexican Restaurant this week.  As we approached the front door there was a sign that said we had to wear a mask to enter.  So, we put on our mask as I am wondering how the hell we’re going to eat with these things on our face.  We got seated and look around and observed everyone sitting at their table with no face mask.  So we removed ours.  Not really sure how this shit works but it seems totally ridiculous.  And it seems this is all arbitrary.  I have been to places that neither the employees or patrons are wearing masks.  I won’t say where as I’m sure someone will need to feel powerful and call the snitch hot line.  Just like Germany during the beginning of the Nazi regime.  This is all so sad.  And the media still spreading all the fear.

The highlight of the week started Friday when we went out to start the yard work.  Started at the usual time around 10AM when the grass is generally dry enough to start.  Mowed about and hour and a half and the John Deere wouldn’t go forward or backward.  Towed it over to the Morton building and took a look at it but have no documentation on the drive system.  So, I called the local dealer and he said it is usually a belt and told me where it was.  I checked and the belt was still present but wasn’t tight like one of the tension pulleys failed.  It was up inside the frame and very difficult to get to so I decided to take it over and let them fix it.  So we loaded it on the trailer and off I went to Shelbyville.  Dropped it off then called my son-in-law and asked if I could borrow his zero turn mower.  He agreed so I just went over there and picked it up.  Came back and off loaded it.  I took it over the bridge to where I left off with the John Deere and almost drove it off the side of the bridge.  Then tried to mow around some trees and things got worse.  So I parked it and let Kathy try it.  She did much better than I did.  So, she finished the mowing with the zero turn and I started doing some of the trimming with the push mower.  I ran out of steam about 5:30PM and had to come in.  I was done.  Kathy continued to do some mowing with the zero turn and finally put it away and came in the house around 6:30PM.  So, Saturday we got up and went out to finish it up.  Definitely the longest it has ever taken us to do the yard work.  The John Deere dealer said they would get to look at it Wednesday if everything goes well.  I’m sure they will get it done then as they have an excellent parts department and should have everything in stock to fix it.  I will update you on this next week.

Last but not least is the ongoing bullshit that is happening everywhere.  They decided to cancel church services here again.  At least at the Methodist Church Kathy goes to.  Claims the Bishop decided that they should close again.  Seems some people that were exposed to someone that had the virus went to church.  I don’t know, seems to me that people need the church more now than ever.  But that’s just my opinion.  I’m not into organized religion much lately.  But I’ve been praying more and thanking God for what I’m blessed with more lately.

And we had the NFAC armed militia come to town here.  They are making an issue about a black lady that got shot by police during a “No Knock” investigation.  There are all kind of rumors about what happened and I doubt we will ever know the truth.  Just what people want you to hear.  Anyway, this armed militia that was the people that invaded Stone Mountain in Georgia a couple weeks ago came here to demonstrate.  These people are suppose to be trained but it seems there was an accidental discharge that wounded several people.  Then they accused the LMPD for escalating the situation because they tried to keep the NFAC group separated from the counter protesters.  I am afraid that with people like this on the street, one accident is going to cause a disaster.

I am trying very hard to keep my head level and just put my focus on things around the house here.  I don’t understand how less stable people are dealing with this.  Of course there is the old adage “Ignorance is Bliss”.  Perhaps I would be better off in that state.

OK, that’s it for this week.  Hope this finds everyone safe and healthy.  Speaking of that, my friend Lynn is back in Texas and it seems the hurricanes headed that way are going to miss where she lives.  We will be praying for her and all the other people in Texas.  Stay safe and healthy everyone.  Blog at you again next week.