As always, first the chronology:

6/14/20 – Sunday – Up at the usual time and usual morning routine. Downstairs to do the blog. Outside to finish up covering the berry bushes to keep the birds from eating the berries. Lunch, then out to the Morton building and made another leg for Shelby’s table. Brought that in and Kathy will take over the finish work. Downstairs and played radio and on the computer awhile. Upstairs and ordered Chinese for dinner. Went to Taylorsville to get it. Home and ate. Downstairs for computer updates and to play radio some more. Upstairs to bed, Big Bang and sleep.

6/15/20 – Monday – Up at the usual time and usual morning routine. Spent the morning printing material for being an election officer. Did some studying. Lunch, back to studying. Then over to the Morton building to fix the light over the door. Back inside. Dinner, downstairs to chat with the guys on 2 meters. Computer work. Upstairs to bed, practiced some CW, TV and sleep.

6/16/20 – Tuesday – Up a little early this morning and usual morning routine. Downstairs and played radio awhile then some computer work. Kathy came over with the grand children and we had lunch. Then out to the pool. Back in and cleaned up then spent time playing Cribbage with Carter. Mike came over to pick them up. Kathy and I had left overs for dinner. Went out to try and pair Kathy’s phone to her car’s computer system. Found the battery dead. Got the charger and brought it up to voltage. Tried starting the car and battery voltage dropped to 11 volts. Pulled the battery and down to Autozone. Battery tested bad so we bought a new one and installed it. All is good. To bed, computer work, Big Bang and sleep.

6/17/20 – Wednesday – Up at the usual time and usual morning routine. Chores around the house then downstairs to play radio and computer work. Called doctor and got an appointment over the phone. Had a light lunch back downstairs. Chatted with the doctor. Told him I think I have a cold. He concurred and sent some prescriptions in. Told me I should have a COVID test just in case. So, went to Mt. Washington and got a test, then to Kroger for medication and home. Kathy came home and out to Hometown Pizza for dinner. Home and chatted with the guys on 2 meters. Upstairs to bed, computer work, Big Bang and sleep.

6/18/20 – Thursday – Up a little early and usual morning routine. Waited for my friend Ann to show up which was shortly after 9AM. We got geared up and out on the motorcycle for a little ride. Put a little over 40 mile on the bike. Got back to the house and socialized till Kathy got home with the grand children. Had lunch and Ann left. Play cribbage with Carter then out to the pool. Inside and cleaned up. Julie came over to pick up the kids and drop off her car. She took the Vibe home. Had dinner. Downstairs to chat with the guys on 2 meters. Lost memory in the Yeasu FT-736. Changed the battery but have other problems. Will look at that later. Computer updates, upstairs to bed. Big Bang and sleep.

6/19/20 – Friday – Up at the usual time and usual morning routine. Cleaned up and took Julie’s car down to Daugherty’s for service on Monday. Then grocery shopping. Home and put groceries away. Then down to Taylorsville to pick up lunch at McDonald’s. Home and ate. Kathy took a nap and I did research on the computer. Kathy got up and we took off to do some more shopping at Hobby Lobby, Walmart, Pet store and Kroger. Home and put things away. Had a snack for dinner. Cut the material we got at Hobby Lobby to cover two tables. Then downstairs to print off some things. Upstairs to bed, TV, reading and sleep.

6/20/20 – Saturday – Up at the usual time and usual morning routine. Cleaned up and downstairs to make some phone calls. Ordered a used radio from R&L Electronics. Paid some bills. Then upstairs to help Kathy get things ready for the Rice family coming over. They came over and we had burgers, brats and Italian sausage on the grill. Took the kids swimming. Out and cleaned up. Julie left with the kids. Took a nap with Kathy. Up and had a light snack for dinner. Downstairs for computer work. Upstairs to bed, TV and sleep.

Julie was having babysitter issues so Kathy ended up with the grand kids Tuesday, Wednesday and Thursday this week.  Tuesday they came over here and I spent time with them for most of Tuesday afternoon.  Wednesday they stayed over at Mike and Julie’s. Thursday they came over here and of course I spent time with them.  Things should settle down next week and Kathy will be back to watching them two days a week.

The battery died in Kathy’s car.  I found it hard to believe that a battery would go bad in a 2017 vehicle.  But I charged it up in case she had let something on in the car.  But when I tried to start it the battery voltage went down 2 volts and stayed there.  No doubt it was the battery.  Of course on a newer car it wasn’t as easy as it used to be to get the battery out.  Spent a good 20 minutes figuring it out but it wasn’t too difficult.  Took the battery to Autozone and they confirmed it tested back.  So we bought a new one and I put it in.  All is good.  I kept reminding Kathy how lucky she was to have a husband that could do all this for her but that didn’t get me anything.

Monday and Tuesday I started feeling like shit.  Was gurgling a bit on exhalation.  Kathy and Julie both strongly suggested I call the doctor so I did on Wednesday.  I find it interesting that in the past they wouldn’t do shit for you unless they saw you.  Now they do everything possible to take care of you over the phone.  Anyway, the doctor did a televisit and agreed that he thought I had some allergies that were settling in my chest as that’s my normal pattern.  However, he suggested I have a COVID test just to be sure.  I agreed and he wanted to send me downtown Louisville.  I opted out of that and told him I’d get it done.  Called the Spencer County Health Department but they couldn’t schedule me till next Wednesday.  So, did some research and found an urgent care facility in Mt. Washington that did testing onsite.  Called them and they will take my insurance and will test me.  So I headed down to Mt. Washington which is about 10 minutes from the house.  Spent more time waiting then anything else.  Great people.  Did the test and I was on my way.  I had gotten a text that my prescriptions where ready so I went to the pharmacy and picked that up.  Started the medication the same day.  Friday got a call from the Urgent Care facility advising me that my test results came back negative.  Surprise, surprise.  So, I will finish up the medication Sunday and be certified COVID-19 free.

We are getting to be a sub-service center for the local car repair shop.  Daugherty’s service center in Taylorsville is a great place.  Good service, reasonable price and honest.  So as a result of my raving about the place my HAM friend Mike, my son-in-law Mike and my daughter all get their automotive work done there.  The down side is they drop their car off here and take the Vibe as loaner and I”m stuck getting their car to Daugherty’s.  Really it’s not a problem.  Just makes it easy for everyone.  Anyway, Julie dropped her car off on Thursday when she came for the kids and took the Vibe.  We took her car down Friday and the work should be done Monday.  We’ll go down and pick it up for her so she can just drive the Vibe back here and take her car. 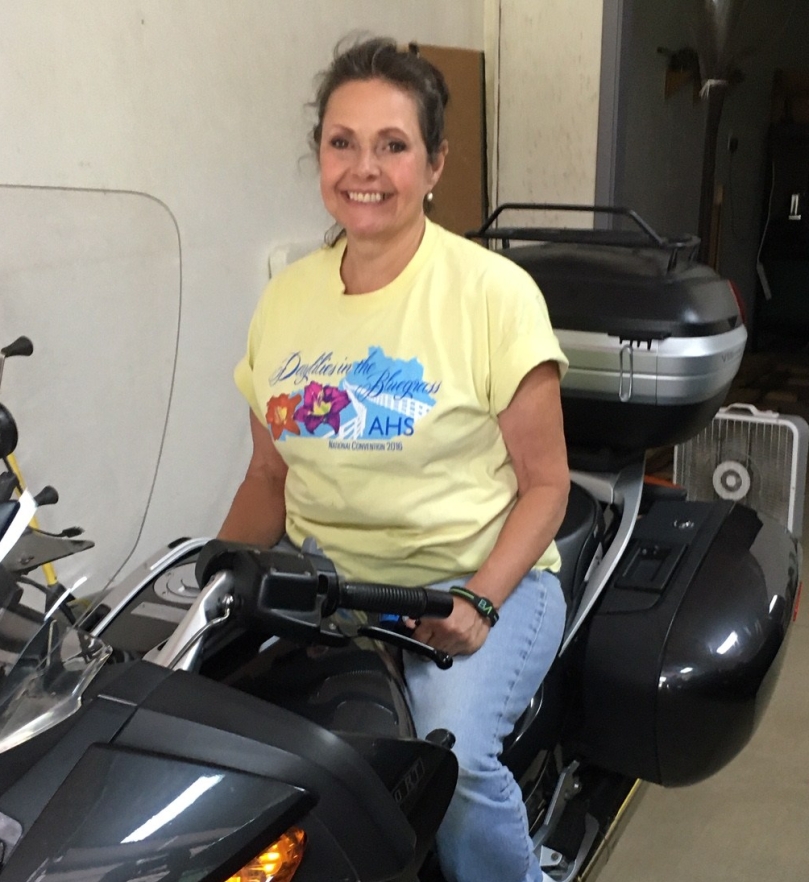 This is a new friend of mine here in Kentucky.  She is my HAM buddy Mike’s sister.  And her name is Ann. We met when she needed some Day Lillys moved from her brother’s place to her new house.  Mike asked me to help and take my truck.  She is a very lovely lady and we seemed to hit it off well.  I mentioned that I rode motorcycle and she said she has never been for a ride.  So I offered to accommodate and she came up to our house Thursday morning.  I went over all the safety stuff and off we went.  I made a short loop around the town of Taylorsville and then gave her an option to take the 5 minute route back to the house or the 25 to 35 minute route.  She opted for the longer so I think she enjoyed it.  Said her butt was getting tired but we did over 40 mile without a rest stop.  I am hoping we will have more nice rides to come.

Well the used radio I got of Ebay bit the dust this week.  It was a butcher job but worked fine for more than a year.  The memory battery apparently died as I lost all the memories.  I replace that and it still loses memory when I turn it off and now I have no receive audio.  I looked online for some direction and most people said since it’s a Yeasu (a cheaper brand) and it’s so old it’s a throw away.  I payed around $300 for it I think.  I looked up the cost of some replacement parts and all I can get are used parts and they want an arm and a leg for them.  So, to expedite things I started looking for another used radio that would do what it did.  I did not look at Ebay this time.  I found one at R & L electronics.  They are a used radio shop in Hamilton, OH.  The model I had was a 736 and they had an 847 for just shy of $600.  So, I bought it and they are shipping it to me and I should have it by Tuesday.  Of course I’ll be working the polls all day and be too tired to play with it when I get home, but it will be here for Wednesday.  Then I’ll take my time and try to repair the old 736 at the component level.

This coming week will be hectic.  Tuesday we will be at the polls from 5AM to well after 6PM.  Wednesday will be haircut day then Thursday I have an appointment to get the motorcycle in for it’s annual maintenance.  Should be a busy but fun week.

Well hope this finds everyone well.  Stay safe and healthy out there.  I”ll blog at you again next week.