We decided to take a trip down to Jamestown, TN to see our friend Joan Cleary and we did some research and found Pickett CCC Memorial State Park nearby where we rented a cabin for a couple nights.  We departed home a little before noon on Tuesday.  We had lunch on the way and we arrived at the park around 3PM.

Here is some fat guy (me) at the entrance to the park. 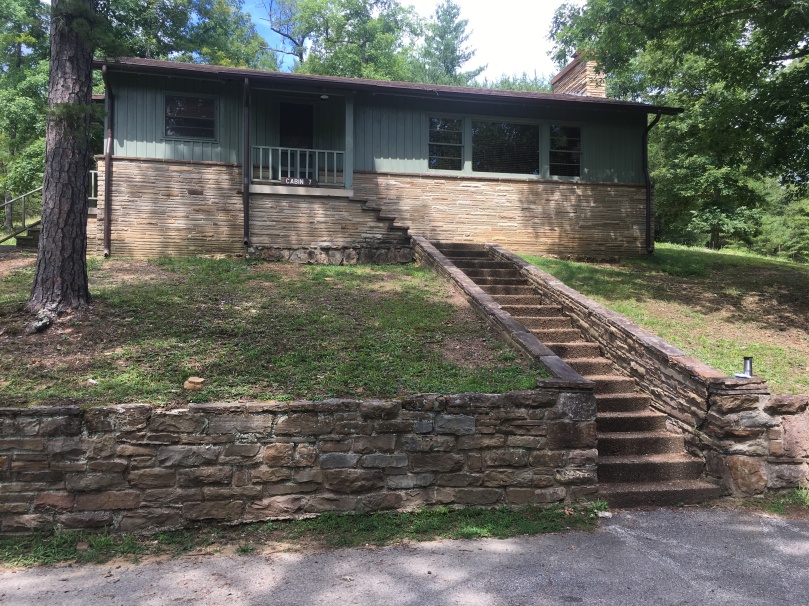 This is the cabin we called home for a couple days.  A little climb up those stairs to get in but it was very nice.  You can’t see it but there is a door out the left side of the cabin to an area with a picnic table and a place to have a charcoal fire to cook on. 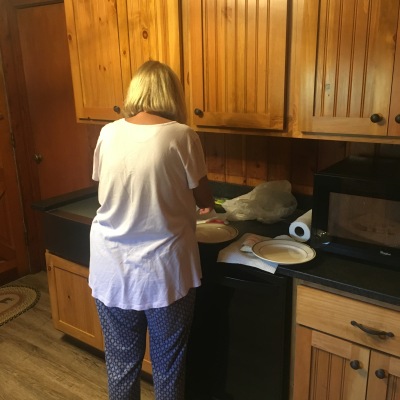 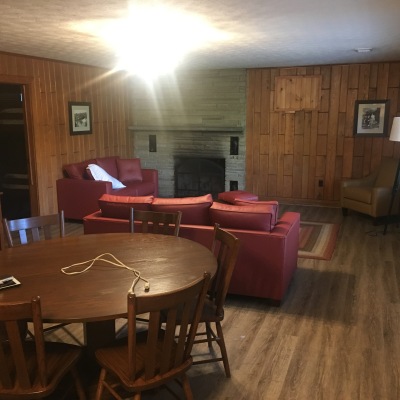 The inside was very nice.  A complete kitchen, including coffee maker and all the utensils you could want.  Even came with a person to cook for you.  Actually that is Kathy at the sink.  It had a fire place but I wasn’t allowed to have a fire, a large living room/dining room area.  It had three bedrooms.  The master had a large double bed, the next bedroom had a smaller double bed and the last had bunk beds.  Easily could have slept  6 people.

We got settled in and decided to venture out and buy some groceries.  We didn’t know it at the time but we were in the same Walmart shopping as our friend Joan was.  We took the groceries back to the cabin and put them away.  Then out to find something to eat.  The restaurant we had scoped out was highly recommended but when we found it they were closed.  They only served Thursday through Saturday and they had a brunch on Sunday.  So, we traveled back into Jamestown to look around.  Our first choice was a family style restaurant that apparently was out of business so reluctantly we settled for Pizza Hut.  It was difficult managing meals as our body clock was on Eastern Time and Jamestown is on Central time.  Ended up we ate a little early.  We got back to the cabin and took a walk to work off some of the dinner.  Then did some reading and to bed.  I might mention here that to our surprise, we had no cell service to amount to anything from the time we traveled out of Kentucky till we got back into the state.  On the way home it occurred to me that we hadn’t seen a cell tower anywhere.  They apparently have some coverage in the area as people in the Walmart and our friend Joan had cell phones that appeared to be working.  So Kathy’s first complaint was that we should have brought a radio.

The next day we got up and had coffee and some breakfast hot pockets that we got at Walmart.  Not exciting but a passable breakfast.  Got the dished cleaned up and cleaned ourselves up and off to find Joan’s place.

A little history here.   Joan worked at Westchester Medical Center but worked per diem at Putnam Hospital where Kathy worked.   She did some short shifts with the outfit Kathy worked for in corrections.  She loves animals and worked part time at Green Chimneys and was extremely active in an organization called EAGALA. You’ll have to google that to find out what all they do.  She had several horses as well as other assorted animals while still living in New York.  We stayed in touch with Joan and did some things together while in New York.  About the same time we decided to move to Kentucky, Joan was planning her move to Tennessee.  We promised each other we would get together after we both settled in so this trip was way overdue. 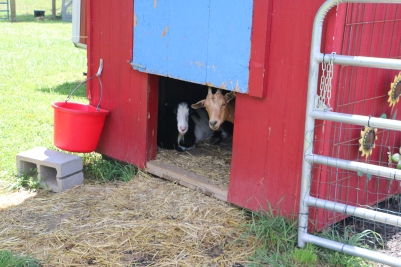 So here is Kathy and Joan talking in the stable.  Kathy loves the animals as well.  You can see Joan has several horses, a couple mules and two goats.  Many stories associated with the animals but Joan loves them all.  It is amazing to see her interact with them.  We spent several hours walking around the farm she has and chatting.  We had lunch with Joan then headed out and back to the cabin.

We spent the rest of the afternoon nosing around the park and learning about it.  In 1922 the Steares Coal and Lumber Co. donated 12,000 acres to the state for preservation.  Then beginning in 1934, the Civilian Conservation Corps (CCC) started work on the park and continued through to 1942.  They built the original 5 cabins, two stone and three wooden, they made the trails, built the ranger station and the 12 acre lake. 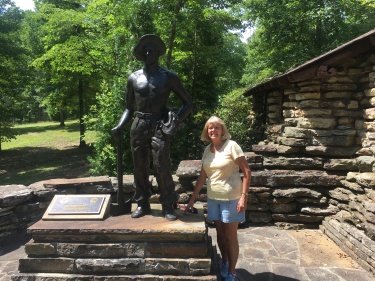 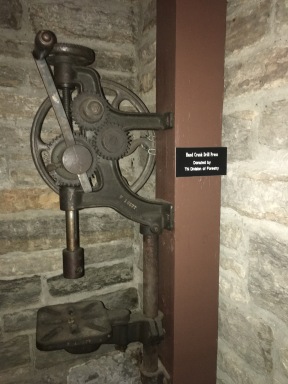 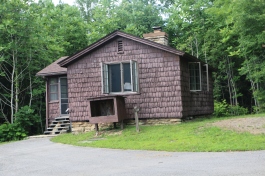 These are some pictures we took while learning about the area.  The cabins are the original cabins built by the CCC.  The plaques where in the old ranger station that the CCC had built and is now the CCC museum.  The very first picture is a monument to the specific CCC units that were deployed to work on the Pickett State Park grounds.  The bottom pictures are a natural stone bridge that we found.  It elevated and Kathy was not comfortable walking around the area so we didn’t stray too far.

After looking around and doing some shopping at the gift shop we went back to the cabin to freshen up a little and get ready for dinner.  The lady in the gift shop indicated that the Chinese Buffet was a good place to eat so we went in there for dinner.  The food was fantastic.  A good choice.  We stopped a Walmart for some more water and dessert.  Then back to the cabin.  Rested awhile then out for a nice long walk.  Back to the cabin and started packing for a trip home.  Did a little reading outside but bugs were getting to us.  So inside and to bed.

Thursday we got up, had breakfast, cleaned up and got packed.  Checked out and headed home.  We stopped in Pall Mall, TN which is the home of Alvin York of the movie fame “Sgt. York”.  Not much to see but they had a post office so we sent off some cards to the grand children.  Stopped at a Ruby Tuesday’s for lunch.  Garmin brought us up a different way then we had gone down so I did some re-negotiating on the way to avoid interstate 64 which had construction last time we traveled it.  Ended up getting home around 3PM.

A very good trip and a great time.